Keeping myself up to date (just a little), I recently attended a presentation entitled Food Quality Matters:  Using Therapeutic Nutrition to Improve Health.  It was most encouraging.  The speaker’s opening comment sums it up beautifully.

“There is hope!  We are entering the era of diabetes reversal.”

Oh yes there is hope not only for individuals with type 2 diabetes, but the obese and the overweight, the stressed and the sleepless, the depressed and the anxious and I like to believe, hope for the prevention of dementia.  Eating a low carb diet works.  I have proven it for myself (my weight loss journey is documented elsewhere.)  And the medical community, slow as it tends to be, is starting to change its longstanding but incorrect, low fat diet recommendations.

Unfortunately, instead of conducting its own review of the available evidence and reaching its own conclusions, the Canadian Government aligned the Canadian Food Guide recommendations with those of the US.  So, most residents of North America excluding Mexico and the far North, were, unbeknownst to themselves, participants in a huge food based experiment supposing that high fat diets are a major factor contributing to death from heart disease.

Some 50 years later, the experiment has some astounding results.  Results, that despite being replicated many times, are largely ignored.  Low fat diets are slowly killing us.  Obedient citizens that we are, we ate low fat.  And we got hungry, moody, irritable and fat.

As a society we are a stubborn lot and the message ‘dietary fat bad’ has been heard loud and clear.  The result?  Paradoxically an unwell, fat fearing, fat society.

Secondly the speaker outlined mounting evidence that supports a low carbohydrate diet as an intervention for disorders known to be secondary to insulin resistance – most notably type two diabetes.

Nope. Not at all.

It is possible.  It’s just not easy.  And your doctor keeps telling to eat your carbs and take your insulin enhancing medications.  With careful and close monitoring of your blood sugars, you can delay the inevitable… diabetic nephropathy (loss of kidney function requiring dialysis three times per week), diabetic retinopathy (loss of eyesight), peripheral neuropathy (loss of sensation in your feet), foot ulcers from poor circulation and perhaps ultimately an amputation.

“There is hope.”  You could try eating a low carb, high fat, real food (unprocessed) diet and stop the progression of this debilitating fatal disease in its tracks.

I for one, reversed my pre-diabetes, hypertension (high blood pressure) and obesity by eating mostly low carb despite my inconsistency.  And true or not, I am willing to believe choosing a low carb, real food diet, will at best prevent, or at the very least, slow the early onset non-Alzheimer’s dementia that affects the elderly women in my family.

To believe otherwise is pointless.

There is hope.  We can end this fattening, low fat diet experiment, that is making us miserable, and slowly killing us.  Eat two – three low carb, high fat, minimally processed meals, 4 – 5 hours apart with no snacking.  It is possible.  Change your health.

It’s your choice.  And, as I have written before – choice, is a beautiful thing.

Buff it up my friends,
Dr Karen

Friends and friendship - the best medicine! 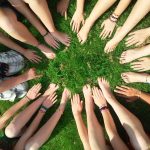